Chronic inflammatory enteropathy (or CIE) is a disease that causes inflammation of the bowel. It has some similarities to a human disease called Crohn’s disease. The inflammation can affect any or all of the stomach, small bowel and large bowel (colon).

What are the signs of chronic inflammatory bowel problems in dogs?

Gastrointestinal (bowel) signs are considered chronic when they have been present for three weeks or more and often clinical signs will come and go. The most common signs associated with gastrointestinal tract disease in dogs include vomiting and diarrhoea. It is important to remember that diarrhoea is a term used to describe altered stool frequency as well as altered stool consistency. Blood and mucus are sometimes seen mixed with the stool. Abdominal pain, ‘squeaky’ guts (this is called ‘borborygmi’) and wind can also be seen. Some cats with chronic inflammatory bowel disease will have no vomiting or diarrhoea and their main sign will be reduced appetite.

The gastrointestinal signs seen in chronic inflammatory enteropathy arise due to inflammation of the wall of the intestines and/or stomach. The initial cause of the inflammation is often unknown; environmental and genetic factors are thought to play a role along with an abnormal response of the body’s immune system that normally fights infection. Chronic inflammatory enteropathy is generally considered to be an ‘idiopathic’ disease (i.e. a disease with no known underlying cause). The diagnosis is one of exclusion and the diagnosis can only be made if other possible causes of the signs have been excluded.

Chronic inflammatory enteropathy is not a single disease process but it is actually a catch-all term applied to a number of diseases with similar signs. It encompasses food responsive disease (FRD), antibiotic responsive diarrhoea (ARD) and inflammatory bowel disease (IBD).

Which breeds can be affected by chronic inflammatory enteropathy?

Chronic inflammatory enteropathy can occur in any breed of dog, but certain breeds such as German Shepherds, Soft-coated Wheaten terrier and Irish Setters are known to have an increased risk. It is typically a disease of the middle aged dog but any aged dog can be affected. Cats can also get CIE. 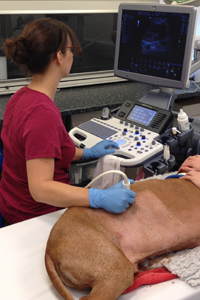 A dog having imaging of its abdomen. Ultrasound is an important tool in the investigation of animals with long standing signs that could be associated with the gastrointestinal tract.

How is chronic inflammatory enteropathy diagnosed?

Chronic inflammatory enteropathy in dogs is normally diagnosed on the basis of history, blood tests, abdominal imaging (typically an ultrasound scan) and sometimes camera evaluation of the upper and/or lower bowel.

How are chronic inflammatory bowel problems in dogs treated?

Dependent upon the severity of the presenting signs, a change in diet may be the first treatment undertaken by your vet. Generally diet trials are performed using a diet that contains a single protein source or one where the proteins are broken down to such a small size (hydrolysed) that they are not recognised as ‘foreign’ by the immune system in the bowel. Some vets prefer to use a single protein source that the patient is unlikely to have been exposed to before (i.e. duck or venison). The diet is normally fed for a minimum of two to four weeks but many dogs respond sooner. If the signs respond to dietary therapy, a diagnosis of food responsive disease is made and dietary therapy is continued long term.

If patients fail to respond to a diet trial or only partially respond, antibiotics may be trialled. If the signs respond, a diagnosis of antibiotic responsive diarrhoea is made. 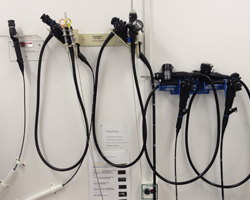 It the animal’s clinical signs persist despite dietary change or antibiotic therapy, or if the clinical signs are particularly severe, camera examination of the bowel will be performed. This is called endoscopy and the procedure is always done under general anaesthesia in animals. Small biopsies are taken from the bowel during this procedure. Assuming inflammation is identified on the biopsies, a diagnosis of inflammatory bowel disease is made. Inflammatory bowel disease is managed with drugs that suppress the immune system’s exuberant response. A steroid called prednisolone is often the first choice medication in both dogs and cats. Additional medications such as ciclosporin and chlormabucil are sometimes used.

What is the outlook for chronic inflammatory bowel disease in dogs?

The outlook for patients with chronic inflammatory enteropathy is dependent upon the severity of the signs and the response to treatment. Many patients will experience intermittent flare ups of their disease long term despite therapy but these are typically milder and shorter in duration once animals are receiving appropriate treatment. Unfortunately a very small proportion of dogs with IBD have disease that is not responsive to drug therapy.

Oregon Veterinary Specialty Hospital (OVSH) has been serving the Portland and Beaverton area community since 1979. Dr. Robert T. Franklin (Internal medicine) welcomes referrals from veterinarians all over the Pacific Northwest. Our goal is to help your pet regain health and live a long and happy life.

Management of Atopic Dermatitis in Dogs and Cats Pet Fire Safety 101: How to Prepare for the Unexpected
Scroll to top