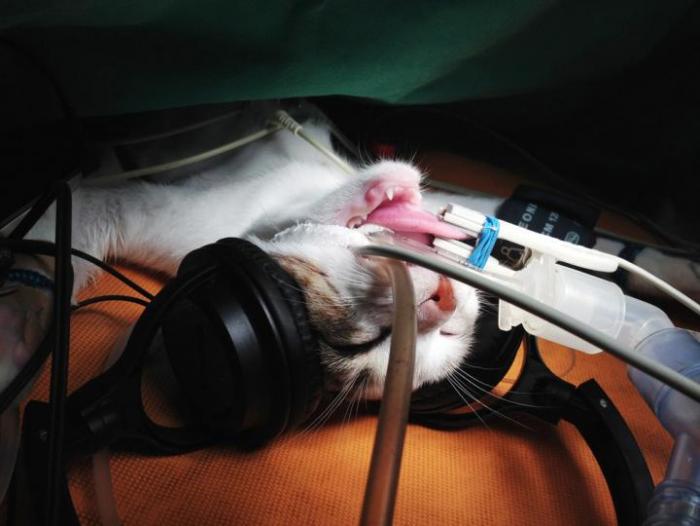 While under anesthetic, the cats listened to classical, pop and heavy metal through headphones.
Image credit: Margaret Melling, editor, JFMS

The research took place in a veterinary clinic in the town of Barreiro, not far from Lisbon in Portugal, and was the work of veterinary clinicians from the University of Lisbon. They report their findings in the Journal of Feline Medicine and Surgery.
Senior author Dr. Miguel Carreira says he got the idea for the study because of what he had noticed when carrying out operations at the veterinary medical center and during teaching sessions at the University. In both places, music is playing in the background when he operates.

Dr. Carreira says he plays the music because it is “an important element in promoting a sense of well-being in the team, the animal and their owners.” He explains:
“Different music genres affect individuals in different ways. During consultations, I have noticed, for example, that most cats like classical music, particularly George Handel compositions, and become more calmer, confident and tolerant throughout the clinical evaluation.”
Dr. Carreira says he decided to conduct a formal study after reading about the measurable effects of music on humans; he was curious to know if music could have any measurable physiological effects on his feline surgical patients.

For their investigation, the team took physiological readings of 12 female cats as they underwent surgery for neutering under general anesthetic. They recorded the cats’ respiratory rate and pupil diameter as they played music to them at various intervals during the procedure.
During their operations, the cats wore headphones through which they were exposed to either 2 minutes of silence (as a control), followed in random order by three 2-minute musical tracks – one of classical music, another of pop music and another of heavy metal music.
The classical music track came from Samuel Barber’s “Adagio for Strings” – Opus 11, the pop music track was from Natalie Imbruglia’s “Torn” and the heavy metal track came from AC/DC’s “Thunderstruck.”
The results showed that classical music elicited the most relaxed state, where respiratory rates and pupil diameters had the lowest values.
Heavy metal on the other hand appeared to elicit the most stress; during this track, the cats showed the highest values for respiratory rate and pupil diameter. The pop music produced intermediate values.
The researchers conclude that their study has implications for cats undergoing surgical procedures involving general anesthetic:

“Use of certain music genres in the surgical theater may contribute to a decrease in the anesthetic dose required, reducing undesirable side effects of anesthetic agents and thus promoting patient safety.”

They now want to take their investigations further and look at how music might affect levels of the stress hormones cortisol and catecholamines, in dogs as well as cats.
The team also plans to use more sophisticated instruments, such as functional MRI and electroencephalography.
In February 2013, Medical News Today learned that many owners are not aware that their cat may have the painful condition osteoarthritis, and this could explain their pet’s unusual behavior. A study conducted by the University of Montreal in Canada found a way to recognize and treat cats with osteoarthritis – a condition that affects 80% of cats over the age of 11.
Source