High-pitched sounds can cause seizures in old cats

When the charity International Cat Care asked veterinary neurologists at Davies Veterinary Specialists, UK, for help with several inquiries it had received regarding cats having seizures, seemingly in response to certain high-pitched sounds, the answer was that the problem was not documented and little, if anything, was known about it. 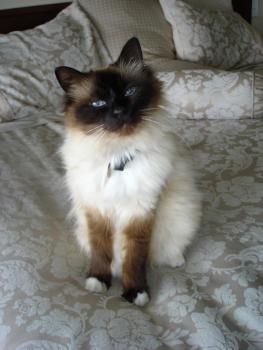 Mark Lowrie and Laurent Garosi from Davies Veterinary Specialists and Robert Harvey from the UCL School of Pharmacy, London, decided to investigate, and compiled a questionnaire for owners to complete. Working with International Cat Care, and using the interest generated by the media, the story went worldwide (dubbed ‘Tom and Jerry syndrome’ after the cartoon character Tom who has a strong startle reflex and often reacts with involuntary jerks to sound stimuli). They received hundreds of replies from across the globe from people who had noticed the same problem in their cats in response to certain types of sound.
Now the resulting paper, entitled ‘Audiogenic reflex seizures in cats’, has been published in the Journal of Feline Medicine and Surgery* and has pulled together information from 96 of these cats, looking at the type and duration of seizure and the triggering sound. It reveals that some cats do indeed suffer from audiogenic reflex seizures – those which are consistently caused by sounds (this is also recognized in people). Certain sounds induced ‘absences’ (non-convulsive seizures), myoclonic seizures (brief, shock-like jerks of a muscle or a group of muscles), or generalised tonic-clonic seizures. This last category is what most people think of as a ‘seizure’, with the cat losing consciousness and its body stiffening and jerking, often for several minutes. The new syndrome has been termed feline audiogenic reflex seizures (FARS).

The investigation found that FARS occurred in pedigree and non-pedigree cats, but that among the pedigrees, the Birman breed was over-represented. This is also a problem of older cats – the average age of seizure onset was 15 years, with cats ranging in age from 10 to 19 years.
The most commonly reported triggers for FARS were the sound of crinkling tin foil (82 cats), a metal spoon clanging in a ceramic feeding bowl (79 cats), chinking or tapping of glass (72 cats), crinkling of paper or plastic bags (71 cats), tapping on a computer keyboard or clicking of a mouse (61), clinking of coins or keys (59), hammering of a nail (38) and even the clicking of an owner’s tongue (24). Other, less common triggers were the sound of breaking the tin foil from packaging, mobile phone texting and ringing, digital alarms, Velcro, stove igniting ticks, running water, a dog jangling its collar as it scratched, computer printer, firewood splitting, wooden blocks being knocked together, walking across a wooden floor with bare feet or squeaky shoes and, in one case, the short, sharp scream of a young child.
Avoiding the sounds could reduce the seizures, although owners reported that it was sometimes difficult to avoid certain sounds, and the loudness of the sound also seemed to increase the severity of seizures.
This study has defined a previously unreported syndrome by using a carefully screened questionnaire and medical records. The geriatric nature of this condition is such that it may be overlooked in older cats, which may potentially suffer from other concurrent conditions. The hope is that publication of the paper will raise awareness among vets in practice about this syndrome. Meanwhile, work is ongoing to identify the genetic basis of this disorder and the team is now also working on a paper about treatment of these cases.
Lead author, Mark Lowrie, says: ‘We have been overwhelmed by the response to our work. A second study is soon to be published suggesting that levetiracetam is an excellent choice of medication in managing this condition. Our experience is that it can completely rid a cat of these sound-induced seizures, including the myoclonic twitches – one owner reported that levetiracetam had ‘truly been a miracle drug for my cat”.
Claire Bessant, Chief Executive of International Cat Care, summed up: ‘How wonderful to be able to go back to those worried owners who came to us for help with a problem previously unrecognized by the veterinary profession with not only an explanation for their cats’ behaviors, but a way to help them as well.’
*Lowrie M, Bessant C, Harvey RJ, Sparkes A and Garosi L. Audiogenic reflex seizures in cat. J Feline Med Surg. Epub ahead of print 27 April 2015. DOI: 10.1177/1098612X15582080.
SAGE Publications
Source